The country of Vietnam is famous for their coffee drinks, and for good reason.  They taste great.

From iced coffees, to flavored coffees, to coffees made from beans pooped out of a weasel’s butt (kid you not), the Vietnamese have a coffee culture that rivals any big city or college town around the world.

For me, the hands down winner was Cà Phê Trứng, or “Egg Coffee”.  The name is unusual enough that most other westerners we met would wrinkle their nose.  For them, an image popped into their minds of  something akin to egg drop soup.  Only this was strings of egg floating around in a coffee broth.  None had been brave enough to try it.

What a shame!  Because this rich treat is a coffee topped with a fluffy, meringue like custard cream.

I probably had about 10 of these at 10 different places.

Some places made it with honey, or Bailey’s, or rice wine, and at one place I heard the suspicious sounds of an espresso machine whirring in the background.

The official history of the drink, is that a chef named Giang invented the drink at a hotel in 1946 when milk was scarce, but sweetened condensed milk was prevalent. 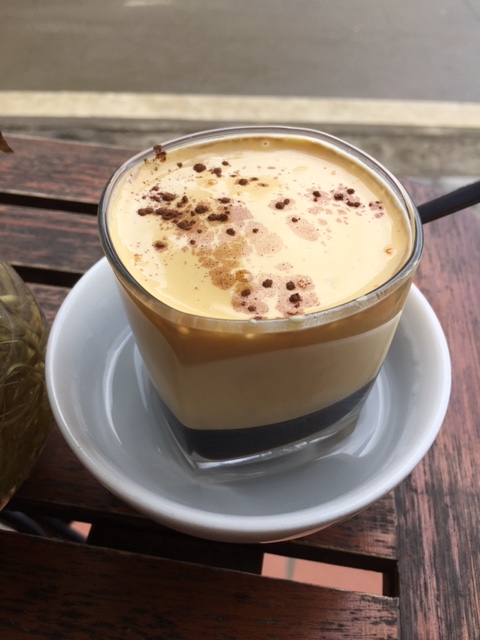 Others say that it’s a recent drink, and has only become popular in the last 4-5 years.

Regardless of the origins, the basic recipe is simply egg yolk whipped with sweetened condensed milk.

Vietnam is not the only country with an egg and coffee mix tradition.  Italian school children would get a similar drink for breakfast in the belief that it would help them with their studies.  I myself decided to test the study theory by drinking an egg coffee about a half hour before class.

I don’t enjoy going to this class, and the egg coffee did nothing to change that.  So it gets 0 points for adjusting my attitude.

It did seem to help me concentrate though, and that level of concentration provided me with the endurance I needed to last the entire time.  For whatever reason, maybe the egg coffee, maybe not, I can also tell that I’ve retained more than usual.

I prefer my Egg Coffee a little lighter and less sweet.  Just the basic kind, with egg and “sweet milk”.  So my recipe uses less of the sugary sweetened condensed milk than other recipes I found.  I also found that if you put the custard mix into the cup first – and THEN pour the coffee in, that it will result in a much more frothy topping.  So yummy.

Please note that this recipe uses raw egg yolk.  So if that makes you squeamish, or salmonella frightens you, than you can’t make this recipe.  There just aren’t any substitutions for the egg yolk.

Whisk vigorously until it forms a cream. Pour in cup, pour coffee in.

Your investment/donation pays for every day living costs and keeps the blog ad free! I appreciate everything no matter how big or small. I recommend purchasing 1 million items. Haven’t tested if the system is capable of that.